skip to main | skip to sidebar

Mike HatcherLas Vegas Sex & Relationships Examiner
A twenty year old British woman, flying with her parents to Las Vegas aboard Virgin Atlantic flight last week must have learned the firsthand lesson of her life. She was caught indulging in loud-sex with a stranger in a small lavatory that was anything but discreet.
Many people argue that “What Happens In Vegas, Stays In Vegas”. But we guess after Ashton Kutcher’s movie “What Happens In Vegas”, people have started losing faith in this argument. We won’t generalize, but guess it is true for a twenty year old girl who got detained by police for having loud sex with a stranger in the airline toilet.
The woman was reportedly drunk, raucous and so engaged in lovemaking with an anonymous man she met for the first time on the flight that she couldn’t even control her urge to make raunchy noises. The noises of their ex-temporary sexual play disturbed fellow passengers so much that they decided to file a complaint against the lust-struck woman.
A passenger from the airline reported that the couple went into the bathroom and within a few minutes the girl started making loud noises, letting everyone know how exotically exciting her lovemaking act was going. When the noises could not stop even after a few more minutes of the act, the cabin crews had to force open the door. Then the girl was kicked off her seat and she kept shouting that it was a drunken abuse.
Perhaps it is simply too much to expect prudence in such a delicate matter, particularly when one is aboard an airline which itself is called Virgin. No matter how horny the girl felt that she had to get into the act, it was utterly nonsense when she had her own parents on the same flight. Needless to say, the parents would have preferred disowning their own daughter if they had the option to. After all, who wants to get to into such an embarrassment only because their daughter just could not hold her horses?
As soon as the flight landed, the twenty year old woman was detained by the Metro Police. Fortunately, she was let go after giving her a few warnings. Lovemaking is not a crime that could have landed her in jail anyway. She was just fortunate enough that no other passenger on the flight sued her for mental torture of those ten minutes. You surely know how it feels to hear someone moaning and groaning in a public places, right?
Despite of her membership in the mile high club with the entire exposition unfolding before her parents and other passengers, police refrained from disclosing the name of the lady or even file any arrest report against her.
The news definitely affected the reputation of the airline, for which Virgin Atlantic public relations officer/ spokesperson, Laura Kilroy told news channels that the airline is not supposed to tolerate any kind of disruptive behavior from passengers. She also added that the safety and welfare of all the passengers and cabin crew members is the top priority of the airline and they are going to make sure that such instances do not repeat in future.
It is still not clear whether the omission of the arrest warrant had anything to do with the Las Vegas motto, “What Happens in Vegas, Stays In Vegas”. This is because the detained woman’s mile-high membership was attained over the Pacific Ocean, which was already outside city limits.
Amazingly, the CEO of Virgin airlines, Sir Richard Branson as stated in the New York Post, he said that mile-high sex is perfectly fine by him, but it does not make them the type of airline that allows banging on bathroom doors. Seems like he was more concerned about playing safe, than funny!
Interestingly, all the news has covered the story of the woman whose noises disturbed fellow passengers and cabin crew members, but none of them have talked about the man who made that woman make those noises. Even the police got their hands on the lady, but there was no hint of the man who was involved. Seems like no one noticed him amidst all the erotic noises and disturbing thoughts of passengers. For what it was, one thing is clear that the Virgin airlines is no more a Virgin. Source - New York Post
Posted by Tori and Tan Tanner at 5:58 PM No comments:

Casual sex – and no emotional wreckage?

Results of a study on casual sex among young adults surprise U researchers. But they note the physical risks.

As most every parent knows, hooking up for casual sex is bad for young people because it causes emotional or psychological damage.

Well, actually, no. At least not for young adults between the ages of 18 and 24, according to a new study by University of Minnesota researchers.

Even they found the results startling.

They asked more than 1,300 young Minnesota adults about their most recent sexual encounters, their self-esteem and their emotional well-being. Interestingly, only about one-fifth of the subjects said their last encounter was casual. But their overall emotional status was no different than the four-fifths who said they were in committed relationships with their most recent sexual partner.

"We were so surprised," said Marla Eisenberg, an assistant professor at the university's School of Public Health who studies adolescent and young adult health.

"The conventional wisdom is that casual sex, 'friends with benefits,' and hooking up is hurtful. That's what we've been teaching kids for decades," especially in the federally funded abstinence-only sex education programs, she said.

Not that Eisenberg advocates casual sex. Far from it.

"Casual sex is not for everyone" as an emotional matter, she said. Moreover, there is real physical risk: Rates of sexually transmitted diseases are rising relentlessly, and teen pregnancy rates in Minnesota are on the increase as well.

But, she said, sex education curriculums, parents and public health programs should "focus on the things that are real threats," such as interpersonal violence, pregnancy risk and STDs, not on the theory that casual sex is emotionally harmful.

The researchers surveyed 1,311 young adults in Minnesota, pulled from a group they began following years ago as part of a major ongoing research study in adolescent health and nutrition. All the people in the study were sexually active and answered a series of survey questions about their last sexual encounter, depressive symptoms and self-esteem.

W3ckUiD3aPc:_Yyc:aUUl
Posted by Tori and Tan Tanner at 3:21 PM No comments:

If you are looking for a place to play over the Memorial Day weekend:

We just have to give a shout out for JJ Western Swing in Pahrump NV. (1 hr north of Vegas) http://www.jjwesternswing.com

We've been twice and just wish we had more time to spend there. It seemed a bit red neck to us when we first arrived and we almost left but we are so fortunate to have stayed around. The average age seemed to be 35 - 45.

For a $40/couple a night suggested donation, you get the cleanest, friendliest, fun & wild time in the west. It includes great food, an overnight stay and brunch the next day.

Wish we could be there for the 4 day Memorial Weekend. Here is an email we got about it:
--------------------
It's, the party weekend you've all been waiting for! Couples and ALL singles are invited to come join us for our Memorial Day, and Summer kick-off party beginning @ 7:00 PM Friday evening, and going all the way through till sometime Monday, when the last person is scraped from the dance floor or pool deck, fished from the pool, skimmed from the hot tub's or has been given some form of Artificial Resuscitation! BBQ'S, POOL PLAY, NUDE SUNBATHING, DANCING, LAUGHING, GREAT PEOPLE, NEED WE SAY MORE? Just pack your bags, and head on out! The BULL, and The RAM say, You gal's better rest up, your gonna need it. Those who are planning an overnight stay or attending multiple day's, please RSVP in advance via our party hot-line @ 775-513-3544.
---------------------
We look forward to hearing about your favorite value, Tori & Tan
Posted by Tori and Tan Tanner at 7:22 AM No comments:

Who is the Best Free Online Strip Poker player?
Compete with these 5 Beautiful Girls and see who's Naked 1st.!
Leave a comment on how well you or her did.
Just CLICK on the Card to Start Getting one of you Naked!! 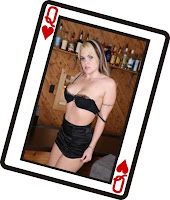 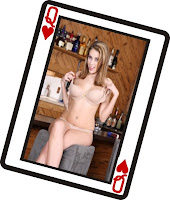 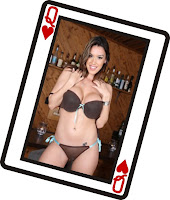 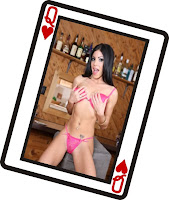 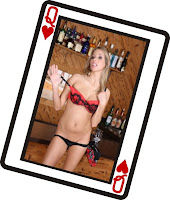 Posted by Tori and Tan Tanner at 8:13 AM No comments:

Making the Most of a Down Economy

Now that your taxes are done, we thought we'd explore the sexier side of financial insolvency. Those of you excited about a little more recreational activity in your bedrooms should keep reading. It turns out all these financial disasters may have a bit of a silver lining.

Exhibit A is the following graph, which shows the average number of times Americans have sex each year, broken down by their level of satisfaction with their financial situation. The data is from the General Social Survey, a National Science Foundation project that has interviewed over 50,000 people over the last four decades.

CLICK HERE TO SEE THE GRAPHS AND READ THE WHOLE ARTICLE AT:

Posted by Tori and Tan Tanner at 6:39 AM No comments:

Hilarious prank played by a couple of DJs on two phone sex operators.

Posted by Tori and Tan Tanner at 10:35 AM No comments: 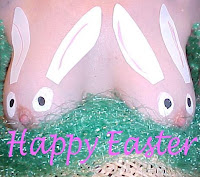 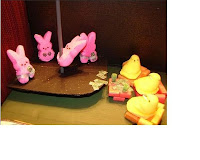 How's That for an Easter Peep Show? Looks just like JJ's, but who's on the poll?

Do You Like Large AAA EGGS ?
Play a Game of FREE Strip Poker on Easter with AAA Shelby
http://tr.im/i7kr

Here's a Spring Video for Those Who Like their Bushes Trimmed 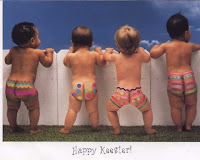 The best things in life are still sweet and gooey !!

HAVE A HAPPY EASTER

Posted by Tori and Tan Tanner at 7:55 AM No comments:

Here is Where We Started - Lots of Great Couples to Chat and Play With!!

Then We Joined This One - Fewer post, less money but the people are more real. A Great Club List.

We also Joined This One

More Bang for the Buck Here - Lifetime only membership only $25 right now. Reg. $200

Tori and Tan Tanner
Las Vegas, NV, United States
We are an Erotic, Fun, Madly In Love, Secure, Open Minded, Adventurous, Work from Home, Drug & Disease free Couple, intending to remain so. Totally love being with each other, music, dancing, singing, traveling for business/pleasure and laughing a lot. We are always getting accused of having too much fun together. If they only knew about this fun.... We love getting past our initial image judgments and discovering the beautiful whole package in people. Mainly, we are into Experiencing life fully and sharing who we are with like minded people. We enjoy the no pressure atmosphere of swing clubs and because of the dirty dancing we can get away with that would get us arrested elsewhere. It's great fore play for us........we do love a party. We Just Plain Luv Life and Making New Friends.